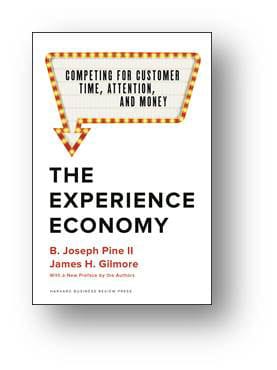 We are proud that Harvard Business Review Press is re-releasing The Experience Economy in hardcover, with books available in early November and official publication date of December 10. And we are also pleased to celebrate this occasion at our LaunchFest book event on November 13, 2019, at the Rock & Roll Hall of Fame in Cleveland!

The Experience Economy: Then & Now

Then, we talked about the nascent, the emerging, the forthcoming Experience Economy. Now we can see it all around us. It is here.

Then, we usually had to argue with people that the Industrial and Service Economies were being supplanted, and that experiences were a distinct economic offering. Now, we just have to state it and most everybody gets it immediately.

Then, experience staging was an art; now it is beginning to become a science.

Then, the Experience Economy was dominated by such traditional experiences as TV, movies, concerts, plays, sporting events, and theme parks. Now, new genres of experience pop up so frequently it’s hard to keep up with all the innovation.

Then, the idea of charging admission outside such obvious experience industries as those above was thought crazy. Now, hundreds of retailers, restauranteurs, cafes, manufacturers, and other non-traditional experience stagers charge for the time customers spend with them.

Then, the Internet was in its infancy. Now, it is the world’s greatest force of commoditization while digital technology simultaneously enables new and wonderous experiences never before possible. Almost everyone carries around devices to summon digital experiences at any moment.

Then, we extended our experience memories via physical objects as memorabilia. Now, we also extend and share our memories through photos and social media sharing (as discussed in an earlier post, “Relaying Remarkable Memories”).

Then, in April 1999 when the book was released, coffee as a commodity cost $.99 per pound. Now, according to The Wall Street Journal, twenty years later in April 2019 it went for even less – $.93/lb! (It went up and down and up and down over that twenty-year period, for that’s what commodities – and commoditized goods and services – do as they are subject to the vagaries of the marketplace.) Meanwhile, think of how much the price of a cup of coffee at Starbucks has gone up in that same timeframe!

Our publisher tells us that 90% of the 10,000 or so business books published every year do not sell even 10,000 copies, and of those that do, the great majority sell them within the first six months of release. When people stop buying the hardcover, then a book goes into paperback, and after another year or so most business books sell very little at all.

The Experience Economy, on the other hand, kept selling thousands of copies year after year and only went into paperback because we decided after more than a decade that it was worth an update, particularly to refresh the cited examples. So very many new experiences (and new genres of experiences) emerged in this time that made the Experience Economy more real for so many people.

In 2011, then,  Harvard released the Updated Edition of The Experience Economy, finally in paperback after 12 years. In the process of that revision, we ended up adding four new experience-design models/frameworks to the book. We also wrote a new Preview identifying what progress had been made toward shifting to the Experience Economy, while also pointing out the gaps that remained and needed to be addressed to see a truly vigorous experiential landscape.

The Experience Economy: The Re-Release

Twenty years after its original release in 1999 The Experience Economy continues to be read by thousands and thousands of new readers each year, across both editions. The book has always had and continues to “have legs”. We did not, after all, identify a fad, but a fundamental change in the very fabric of all advanced economies.

Because of its continued – make that increasing – relevance, we approached Harvard Business Review Press again to re-release The Experience Economy in hardcover, this time with a new subtitle: Competing for Customer Time, Attention, and Money. Building on the earlier Updated Edition we wrote a new Preview that puts our core idea – that experiences are a distinct economic offering, and therefore we would have (and now have) an economy where it becomes the predominant economic offering – into today’s context.

The subtitle and new Preview focus on one key discovery of the Experience Economy since the original book came out: every business now competes not only with players in its own industry, nor only with those in its immediate geographic area, but with every other company in the world for the time, attention, and money of individual customers.

We provide new metrics for measuring performance – recognizing that time is the currency of experiences, that gaining customer attention is the critical success factor in an age when customers can abandon any non-engaging experience via a mere touch of their smartphone screens, and that experiences must be increasingly monetized, explicitly charged for – and not just treated as another free marketing ploy.

Here & now in 2019, the Experience Economy has fully arrived, with experiential activity that has emerged in nearly every industry and business.

The primary question for every company, therefore, is: How will you compete on the three competitive dimensions of time, attention, and money in today’s Experience Economy?

The Experience Economy continues to be the cornerstone guide for creating new experiential value for customers. We encourage you to read and reread it if you seek to succeed in an age when goods and services are no longer enough.

What consumers – and increasingly business customers – want today more than ever are experiences that engage them, experiences that, following our principles and frameworks offered in this book, you can design to be robust, cohesive, personal, dramatic, and even transformative.