What Would We Do Differently If We Charged Admission?

The History of the Experience Economy 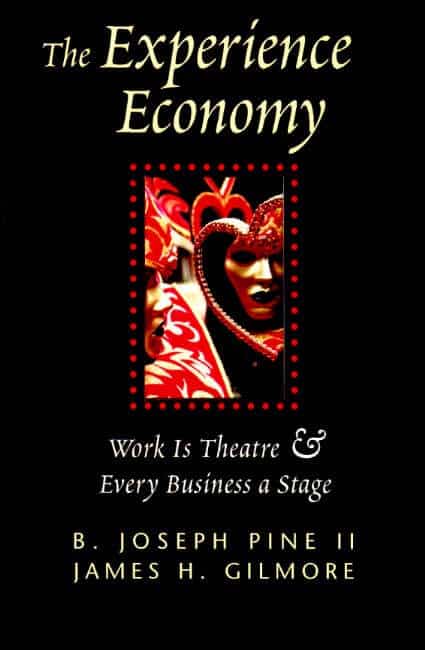 The History of the “Experience Economy”

On Twitter, blog posts, and even journal citations I keep reading such incorrect statements as “the term the Experience Economy has been around since 1998,” so I thought I would set the record straight.

When people say that, they’re referring of course not to the original hardcover The Experience Economy: Work Is Theatre & Every Business a Stage (which was published in March 1999) but to the July/August 1998 Harvard Business Review article that Jim & I wrote that preceded it, “Welcome to the Experience Economy”.

Thanks to editor Steve Prokesch for your great editing job here, particularly in deciding to start it off with this wonderful point: “The entire history of economic progress can be recapitulated in the four-stage evolution of the birthday cake.”

Think about it: when my mom threw a birthday party for me as a kid, the highlight of it was the birthday cake that she brought out, candles alit, as everyone sang “Happy Birthday” to me. And back then, my mom made that cake from scratch – meaning she touched commodities! And if you add the cost of the flour, the eggs, the sugar, the – actually, I have no idea what goes into a birthday cake, since I never made one. But the total cost of those commodities was just a few dimes.

Along came manufacturers like Betty Crocker and Duncan Hines, taking those same commodities, mixing them up, packaging them, and then putting on the grocery store shelf such goods as cake mix and canned frosting – which cost a few dollars apiece, ten times as much as the commodities. As we became more and more time-starved, we began calling up that grocery store or the corner bakery and asked them to bake the cake for us – which cost $10, $15, maybe $20, yet another order of magnitude more value over the goods.

Then we got to the point where not only didn’t we make the cake, we didn’t throw the party! We outsourced it to Chuck E. Cheese’s or myriad other places where we paid someone else to throw the entire party for our kids. This would cost at least tens of dollars and often a hundred or more – yet another order of magnitude in value for the experience! 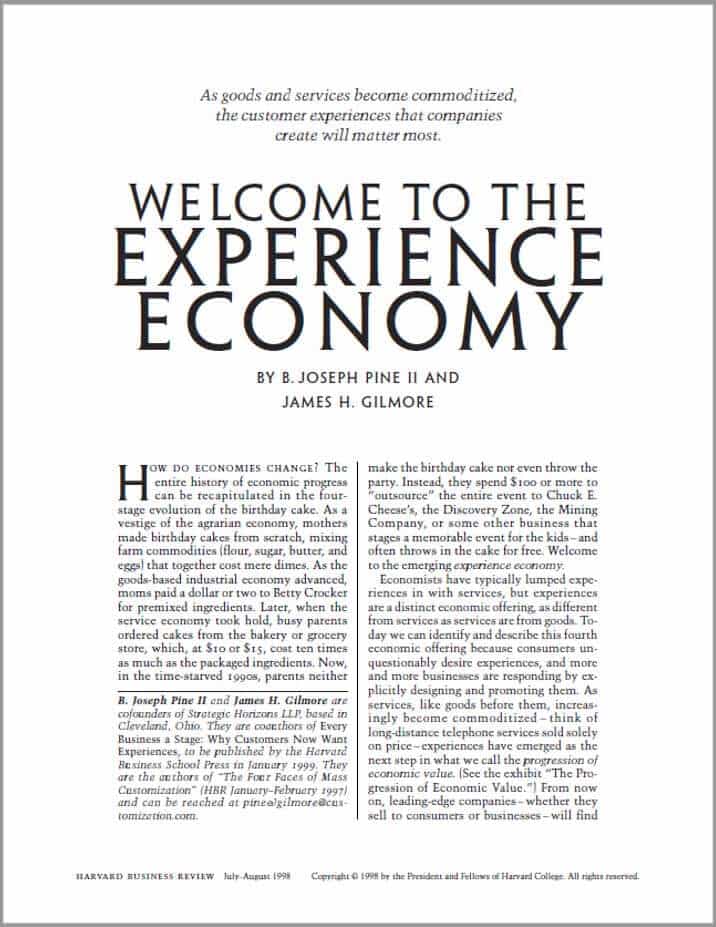 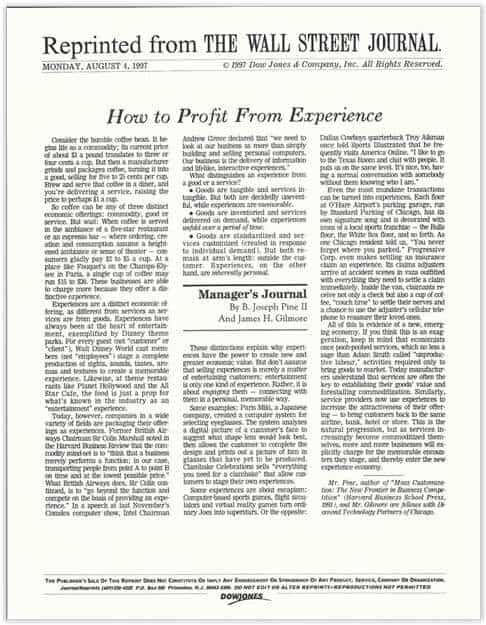 How to Profit from the “Experience Economy”

It was the perfect way to start the HBR article, but in fact that was not the first time we published our Progression of Economic Value tracing this economic history from the Agrarian Economy (based on commodities) to the Industrial Economy (based on goods) through the Service Economy into today’s Experience Economy. Before that 1998 piece we published a “Manager’s Journal” column on the Op-Ed page of The Wall Street Journal called "How to Profit From Experience" on August 4, 1997 – twenty years ago to the day of this Thoughts post!

Here we started out telling the story of the Experience Economy not with a birthday cake but with our favorite progression, that of the lowly coffee bean. Here a true commodity that costs only two or three cents per cup is changed via the miracle of capitalism first into the physical goods of ground and roasted coffee that costs 5-10¢ per cup, then into the service of brewing the cup for a customer in a vending machine, diner, bodega, kiosk, or 7-11, which costs 50¢ to a dollar or two per cup, and finally into the experience of having it made just for you with the ambiance and theatre of a Starbucks – which creates places where you can sit down and spend your time enjoying that cup of custom coffee – costing $3, $4, $5 and up!

In both the birthday cake and coffee cases we see an industry with four distinct levels of value, each depending on what business the company thinks it is in! That is the Progression of Economic Value in a nutshell (or, rather, birthday cake or coffee bean). 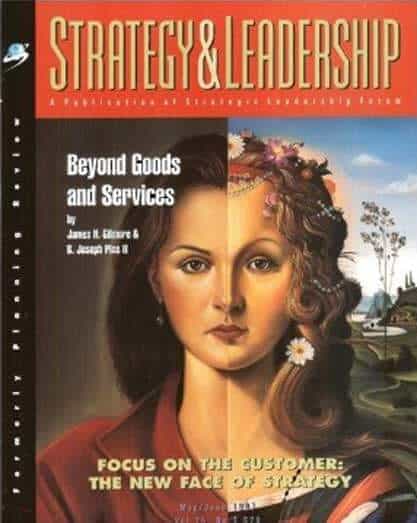 But even that The Wall Street Journal piece was not the first place in which we published it! That honor goes to the Strategy & Leadership journal with the publication of “Beyond Goods and Services: Staging experiences and guiding transformations” in the May/June 1997 issue of. (And thanks here to longtime editor Robert Randall for his stewardship of many of our ideas and frameworks in this august journal, on whose editorial board I sit.)

As that subtitle attests, we included in the Progression of Economic Value (presented here in pyramid form vs. what many call “the ladder” in the HBR article and book) not just the shift into the Experience Economy but the coming shift into the Transformation Economy. For eventually experiences will be as commoditized as services and goods, so companies in their never-ending search for differentiation will seek to stage those experiences that help customers achieve their aspirations, to help them become who (or in the B2B case of enterprises, what) they want to become. Transformations, which companies guide for, with, and in their customers, are the fifth and final economic offering in the Progression, for there is no more economic value you can provide than to help someone achieve his aspirations.

Truly the First in Print

Ah, but that S&L piece was not, in fact, the first time I talked about the shift from goods and services to experiences in print! That honor goes to my response to “Competing on Customer Service: An Interview with British Airways’ Sir Colin Marshall”, in the November-December 1995 issue of the Harvard Business Review, also edited by our longtime HBR editor Steve Prokesch. Appearing in the January-February 1996 issue, I wrote how Sir Colin Marshall had confirmed several concepts in my previously published work on Mass Customization, but also that he was guiding BA further to go (in his words) “beyond the function and compete on the basis of providing an experience”, making “the process of flying from point A to point B as effortless and pleasant as possible”. (If only the airline industry had fulfilled on that promise over the past two decades!) Here’s how I responded:

And he uses exactly the right word when he says that to do so the company must go beyond the delivery of basic services and orchestrate an unbeatable travel experience. In today’s highly developed service economy, innovative managers are finding that it is no longer enough to compete on the basics, on the functions and features they provide; those have indeed come to be seen as commodities – undifferentiated in customers’ minds. To fulfill value-driven needs, companies wrap their services (and products, for that matter) into experience that personally engage each customer.

OK, that’s not the first use of the term “Experience Economy” – that honor still goes to the Strategy & Leadership piece – but the allusion there is the first discussion of experience staging in print. (Jim and I eventually decided on “staging” as exactly the right word for the economic function of experiences over “orchestrating” and “choreographing” once we figured out that in the Experience Economy, work IS theatre. But that’s a story for another time.)

It is then just two short years from this publication to the genesis of the term. It was late 1993 or early 1994 and I was back teaching on Mass Customization at the IBM Advanced Business Institute in Palisades, New York, to a number of staff in the IBM Consulting Group (which I had left in June 1993 to form Strategic Horizons).

As I often did, I discussed how mass customizing a good – making an individually customized physical product with low costs, high volume, efficient operations – automatically turned it into a service. If you think about the classic distinctions between the two: goods are standardized while services are customized – done on behalf of an individual customer; goods are inventoried after production while services are delivered on demand – when the customer says this is exactly what he wants; and goods are tangible, while services are intangible. And part and parcel of Mass Customization is the intangible service of helping customers figure out exactly what they want. So mass customizing a good means defining, making, and delivering an exact item that fits each individual customer’s needs at a particular moment in time – and that’s a service!

So one of the IBM consultants in the back of the room shoots up his hand and says, “You talk about mass customizing services too. What does it turn a service into?” And I shot back: “Mass Customization automatically turns a service into an experience.” I immediately said to himself, “Whoa. That sounds good!” So I stopped the class to write it down, just to make sure I wouldn’t forget it. Turns out I didn’t have to, for the notion consumed my idle thoughts for months: delivering exactly the right service – precisely what an individual needs over a duration of time – can’t help but make them go “Wow!” and turn it into a memorable event, an experience! And if that were true, then experiences were a distinct economic offering, as distinct from services as services were from goods. And that suggested that the developed world would shift into an Experience Economy, supplanting the Service Economy just as that had superseded the Industrial Economy in the latter half of the 20th century, which in turn had unseated the Agrarian Economy a century before. 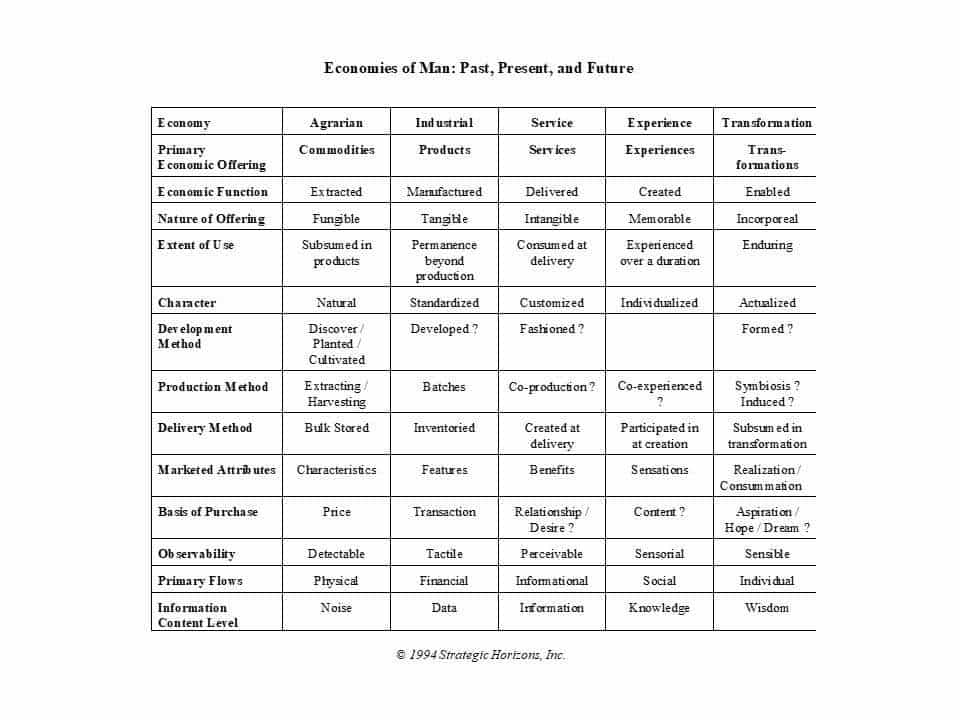 Late one night, I had made enough progress in my thinking to get out a piece of paper and write down all of the distinctions I could think of between each of the four economic offerings at the core of the four economies – commodities, goods, services, and experiences – plus that fifth (and as it turns out, final) economic offering, transformations. (For into what does mass customizing an experience turn the offering? If you design an experience so appropriate for a particular person – precisely what he needs to be fundamentally affected by it over time – then it can’t help but become a life-transforming experience that changes that customer in some way.)

And the Rest of the Story

At that point I knew I really had something – something that would change how executives saw the world of business. So the next morning I typed it all up into a table, and flying off to see my favorite client – Jim Gilmore, then head of CSC Consulting’s process innovation practice – faxed it to him in advance with special instructions to Jim’s assistant not to open it until we met. And together in Cleveland we mulled over the not-quite-complete and still-unrefined table, growing in our mutual appreciation for how the recognition of these two newly identified economic offerings could help executives think differently about how they created economic value for their customers. That day was also sowed the seeds of Jim leaving CSC to join me at Strategic Horizons in January 1996.

And the rest, as they say, is history.